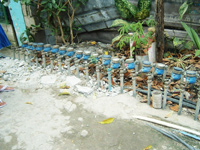 While the country boasts of 80% of the Filipinos as having access to water, a World Bank study showed that only less than 44% of the entire population has piped-in water. (World Bank, 2006). The problem is more pronounced in informal urban communities because of the sheer concentration of population in these blighted areas. Such is the case of Brgy. Mauway in Mandaluyong City and Brgy. 164 in Pasay City.

The fact that Brgy. Mauway and Brgy. 164 are informal settlements; the formal water concessionaires are hindered from providing water services to these communities. Thus, the poor residents have no other recourse but to grapple with the high cost of water sold by water vendors operated by syndicates. This situation gives rise to a vicious cycle of dependence.

Other issues and concerns are a lack of financial capital because of their lack of a permanent or stable source of income. The fact that the local government has not taken steps to install at least one communal water faucet in their communities also exacerbates the problem.

However, the two communities in Mandaluyong and Pasay were able to hurdle their problem with water. The right mix of various community capital allowed this to happen.

With the presence of stakeholders (stakeholder capital) such as the Foundation for Entrepreneurial Development, Inc. (FEDI), the Peace and Equity Foundation (PEF) and their respective community organizations (structural capital), these two places that have been waterless for more than a decade were able to develop appropriate water systems for their respective communities.

The external stakeholders have the resources required for the delivery of water services. The communities also have existing resources or community assets/ capital such as their respective community organizations, human resources and, social and cultural capital to speak of. As such, they have leveraged these various kinds of capital with the financial and technical assistance from PEF through FEDI. Given the right mix of these resources, there is a strong possibility for project success.

By harnessing their community organizations (structural capital) and drawing strength from their social and cultural capital (i.e., utilizing community camaraderie in the right-of-way negotiations) plus the availability of technology and by utilizing human resource capital (i.e., working leaders and available community workers) as well as available financial capital (i.e., contributions for water connections) the two communities were able to achieve their common goal and felt need to have water service come into their homes. Likewise, the right timing of the technical and financial capital from the external stakeholder community has also spurred the momentum.

As a result, the project objectives were realized. Brgy. Mauway was able to set up a Level III water system, while Brgy. 164 had a Level II system. As planned, the organizational systems or structural capital were further developed to enable them to manage their projects. Aside from achieving the intended results, the project has also made positive contributions in terms of other community and stakeholder capital.

There were some issues and concerns, hindering factors and challenges in the implementation that included the capacity to manage financial capital, sustain structural arrangements and policies, and deal with the legal concerns of the stakeholders. However, many of these issues were addressed and as a result, the following were observed: