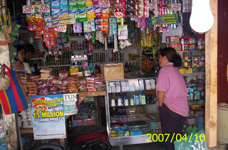 This case study describes the micro-finance project funded by the Peace and Equity Foundation (PEF) in partnership with the Gata Daku Multi-purpose Cooperative (GDMPC) that is based in Clarin, Misamis Oriental. The project, called “Micro-Livelihood Support Program (MLSP)” aimed to make productive loans accessible to micro-entrepreneurs in the town of Clarin, and at the same time, address the problem of vulnerability in the social capital of the community, in the form of usurious moneylenders, colloquially known as “5/6.”

The MLSP was implemented for a period of one year and eight months (June 2003-February 2005). At the end of the project, GDMPC’s financial capital grew, but its resources could not meet the demand from its existing members/clients and from other applicants for micro-finance services. From this, it could be surmised that the entrepreneurial poor needed credit to sustain their business, but they no longer wanted to remain at the mercy of loan sharks.

Thus, the project was extended through the “Expanded Micro-Livelihood Support Program (EMLSP)” that started in July 2005 and will end in July 2008. The total funds released for the two projects amounted to P2,873,000 broken down into: P2.6M as loans and P273,000 as grants for institutional support..

During the EMLSP project, the main strategy used was group lending, patterned after the Grameen model. It was at this point that the structural capital of GDMPC was significantly enhanced when it consolidated its policies on peer group lending into a written manual. This was achieved through a training intervention facilitated by PEF, which addressed the vulnerability in GDMPC’s human capital, i.e., the lack of skills in micro-finance (MF) operations.

The interplay of capital during project implementation showed that structural (manual on policies) and human (leadership of manager) capital were mainly used to achieve the project objectives while social capital (trust between GDMPC and its members) served as the foundation for the growth of both tangible assets (financial) and intangible assets (structural, human and stakeholder). Social capital was not consciously used as much as the other intangible capital, but it was clear that the level of trust, which has been built over the years, was the element that spurred the more than satisfactory accomplishment of the project deliverables. .

As of December 2007, a total of 2,192 members/clients have been served; and this number is spread out in the three towns and two cities in Misamis Occidental and one town in Zamboanga del Sur. The types of business that the project has been supporting are in agriculture (production and trading), consumer goods and food stores such as sari-sari and carenderia, vending (e.g. fish, SMART and GLOBE cellular phone e-loads, balut, tuba), livestock (poultry and swine) and other types of undertakings such as food processing and gasoline retailing. One of the project’s targets is to effect a 20% increase in the members’ incomes. However, this has yet to be determined through an impact study that will hopefully be conducted before the project terminates in July 2008.