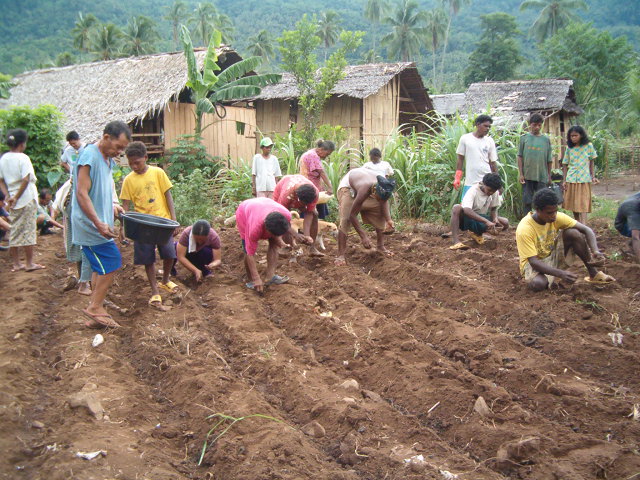 This descriptive study examines the interventions implemented by the Surigao del Norte NGO Coalition for Development (SUNGCOD) to address the main vulnerabilities of two Mamanwa communities. These vulnerabilities are: the lack of land/permanent settlement and the lack of knowledge in health practices/low level of literacy.

SUNGCOD’s secretariat became aware of the Mamanwa’s vulnerabilities when it participated in the Integrated Community Health Services Project (ICHSP), a six-month-program launched by the Department of Health (DOH) and funded by Aus-Aid. For years, the Mamanwa have been moving from one settlement site to another, putting up makeshift houses on land where they have been given a temporary permit to stay. This arrangement resulted in frequent displacements. Moreover, the temporary settlements were often lacking in basic services like water and electricity and, the transitory nature of their living conditions hindered access to public health and education.

In 2002, the Peace and Equity Foundation (PEF) granted P761,000.00 to SUNGCOD for the project “Integrated Health Initiatives for Two Indigeneous People Communities.” The Direct Project cost amounted to P411,600 and the Institutional Development cost amounted to P350,000.

The project was conceptualized based on the needs articulated by the beneficiaries themselves. The two major objectives of the project were (a) to acquire land for the permanent settlement of the Mamanwa communities; and (b) to improve human capital through a health and literacy campaign. Most of the project deliverables were attained through the use of stakeholder, human, and natural capital.

The major gains from the project were: ownership of titled lands, ownership of houses and access to potable water and electricity. A total of forty-five families were provided with houses (each with a toilet): fourteen families in Brgy. Gacepan (10-sq.ft.-lot/family) and thirty-one families in Brgy. Payapag (12-sq.ft.-lot/family). A Memorandum of Agreement for each settlement, signed by representatives from the Mamanwa organization, the barangay captain, and SUNGCOD’ president, provides for communal ownership of the properties. During project implementation, a re-alignment of funds made possible the provision of potable water level II and power supply from the barangays.

Another major benefit is the improvement of structural capital. Two community-based organizations were established, namely: the Mauswagong Mamanwa sa Payapag Association (Association of Progressive Mamanwa in Payapag); and, the Hugpong sa Mamanwa sa Gacepan (Union of Mamanwa in Gacepan). The organizations were given the responsibility of managing the affairs of the settlement.

Meanwhile, the vulnerabilities in human capital were addressed through health-cum-literacy classes, health campaign and training programs on basic leadership and organic farming.

Based on the proponent’s assessment of the project, the following concerns on sustainability need to be addressed: (1) Provision of alternative livelihood projects for the settlement residents; (2) Continuity of adult literacy classes and installation of education for tribal traditions; and (3) Continued organizational development and strengthening of the Mamanwa organizations.