Uplifting and Normalizing Malnourished Children of Lamut, Ifugao through Macro and Micro Nutrient Supplementation and Advocacy 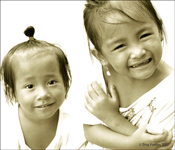 The municipality of Lamut, Ifugao has its own Municipal Nutrition Action Program (MNAP) patterned after the Philippine Nutrition Action Plan (PNAP). However, its resources were not enough to cover all of its eighteen barangays. Recognizing this problem, the Lamut Women’s Organization (LAWO) committed to support the local government in its efforts to solve the problem of malnutrition. Consequently, LAWO proposed a project to the Cordillera Network of Development NGOs and POs (CORDNET) to provide assistance for the project entitled: Uplifting and Normalizing Malnourished Children of Lamut, Ifugao through Macro and Micro Nutrient Supplementation and Advocacy. The project was approved and implemented from July 2004 until June 2005.

The project allowed for a convergence of services among the LGU departments/ agencies as well as private institutions and community project partner-beneficiaries. Generally, the project implementation has been smooth. There were, however, issues on budgetary appropriations in six barangays owing to their low Internal revenue allotment.

The malnutrition issue in Lamut was attributed to budgetary constraints and some cultural factors. Thus, the biggest challenge to the project was how to institutionalize the nutrition program and effect changes or how to improve the cultural and human capital and in the process do away with some practices that do not contribute positively to a nutrition project. The lack of cooperation and participation by the barangay leaders as well as the target families was noted in some areas. The success of the project was noted in certain places where barangay officials were actively involved by giving financial and moral support. The project not only gave them the opportunity to provide services to the poor but it has also given the LGU officials and employees another way of implementing a nutrition project. The use of community development approaches and resource mobilization techniques made the difference, aside from the commitment of LAWO for this project.

Those in charge used several forms of capital to implement the project. Mostly, the project mobilized stakeholder capital to attain its objectives in order for it to mobilize other capital requirements. It also relied on changing certain cultural patterns particularly on food preparation, as well as by developing alternative and affordable food menus, and developing human capital so that these methods will be put to good use.

In summary, nutrition is a function of different factors such as culture, food production and its equitable distribution, health and physical condition of the people, and other conditions. For Lamut, Ifugao, nutrition projects are also a function of governance because of the need to appropriate needed resources as well as the need to extend moral support that emanates from the executive and legislative mandates.

Moreover, the availability of technology becomes a plus factor. Project implementers just needed to customize these tools according to the culture, condition and capacity of the client-beneficiaries. Nutrition is part of a people’s way of life and introducing new concepts, mechanisms activities and approaches that would significantly alter those accepted and practiced norms and ways of doing things have to be carefully introduced. These changes should be done in a way that it would not become obstrusive to the prevailing cultural practices.