(This is the script of the introductory video for the KM4Dev Focused Conversation on November 4-8, 2013 on the topic of transboundary innovation) 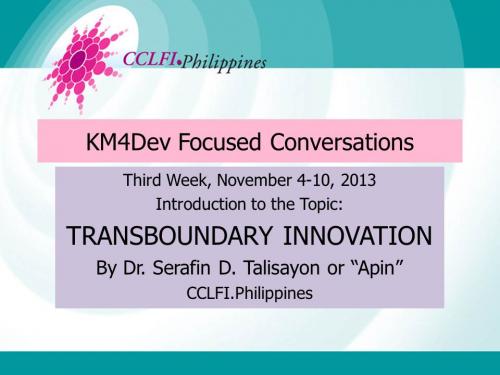 Today our topic is transboundary innovation. 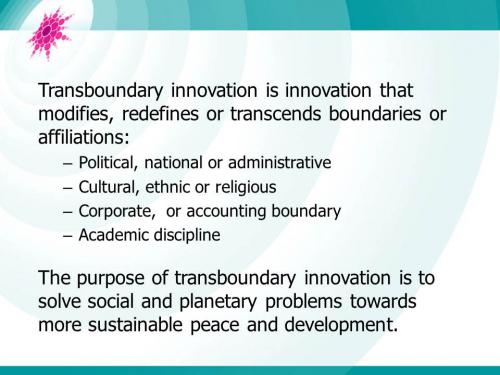 Let me begin with a development disaster in the Philippines in the 1970s, the Chico River Dam project. 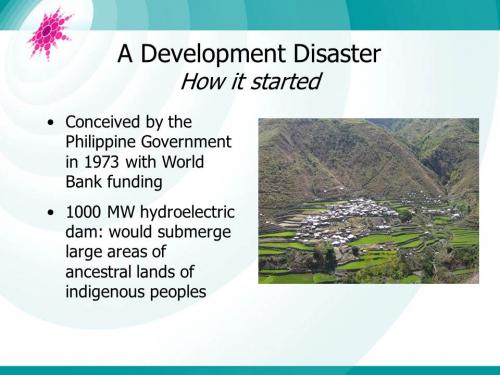 Because this big hydroelectric dam project would submerge large areas of ancestral lands of indigenous peoples, it generated massive local and international opposition.

Armed resistance by the local people and use of military force by the Philippine Government led to deaths, including a tribal leader. The struggle united the tribes in the mountainous areas and eventually triggered the establishment of the Cordillera Peoples Liberation Army. 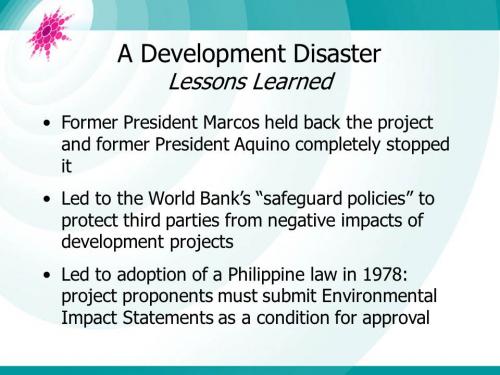 The World Bank learned a lesson from many similar projects. It adopted “safeguard policies” to protect third parties from negative impacts of development projects. The Philippine Government also learned a lesson and followed the U.S. Government in enacting a law in 1978 which requires project proponents to submit an acceptable Environmental Impact Statement (EIS) as a condition for approval. 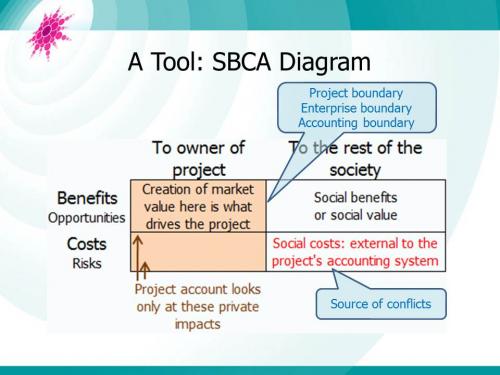 Let us introduce a simple tool to better understand how the EIS works, the SBCA diagram. SBCA stands for social benefit-cost analysis. The diagram disaggregates the impacts of a project into four types: benefits and costs to the project owner, and benefits and costs to the rest of society. The project’s accounting system looks only at the left side. The benefits and costs at the right side are external to the accounting system. The vertical line in the middle represents the accounting boundary as well as the the project or enterprise boundary. The lower right hand cell represents social costs. These are felt by people who have no control over the project. It is often the source of conflicts. 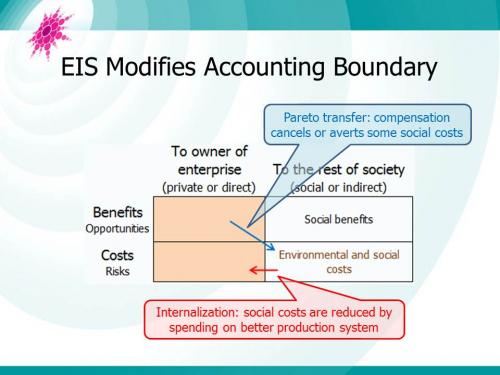 The EIS system ensures that projects with unacceptable social costs are not allowed by the government to proceed. To get approval, the project proponent can reduce social costs by spending on a better production system, e.g. one that produces less pollution. The project proponent can also compensate those who suffer or could suffer environmental and social costs. For example, the Philippine Government requires that power production companies provide an Environmental and Livelihood Fund to affected or potentially affected communities, amounting to 1 centavo per kilowatt-hour of power produced. In short, the EIA is an innovation that modified the accounting boundaries of the project. 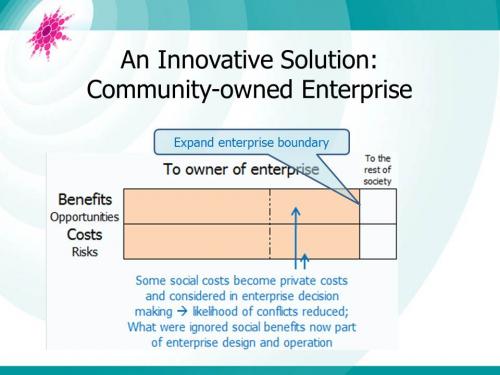 A more innovative solution is a community owned enterprise. By expanding the enterprise boundary, some social costs become private costs. External costs become internal costs which are now factored in enterprise decision making. Because the community itself will feel the negative impacts, it can and will make decisions to reduce them. If the geographic jurisdiction of a community-owned enterprise internalizes all or most environmental and social costs, development disasters like the Chico River Dam project would never have happened.

In addition, social benefits that were external to the project become part of decision making for better enterprise design and operation. 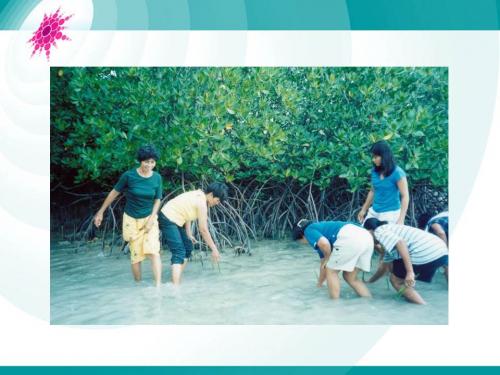 Ownership and the benefits from ownership serve as strong incentives to participation in the enterprise. 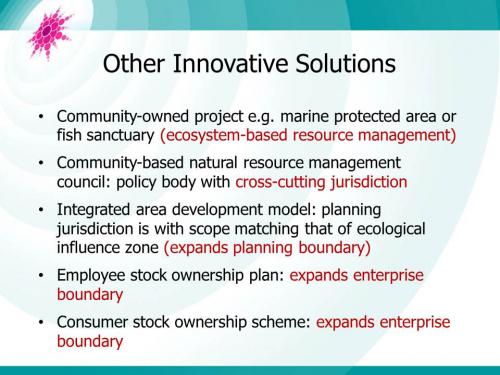 Similar transboundary innovations are the following: 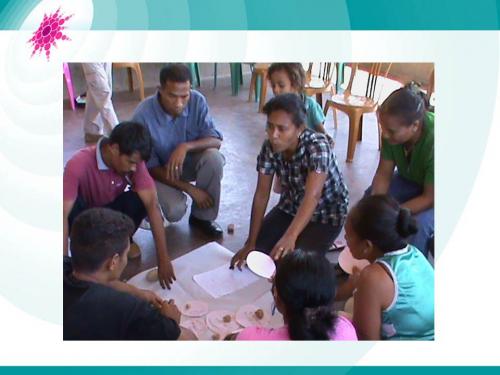 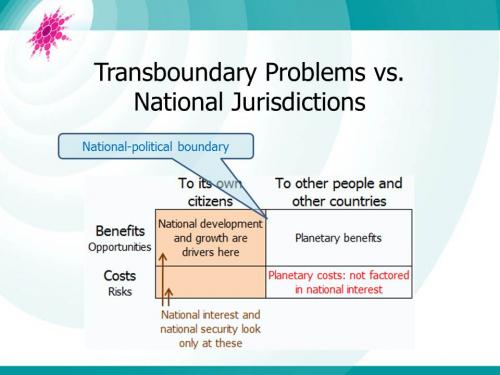 Similar observations apply to national-political boundaries. National interest and national security look only at the left side of the SBCA diagram. They are driven by national development and growth. However, planetary benefits and particularly planetary costs are not factored in national interest calculations. National jurisdictions are clearly inadequate to address problems or issues that entail substantial planetary benefits and costs. 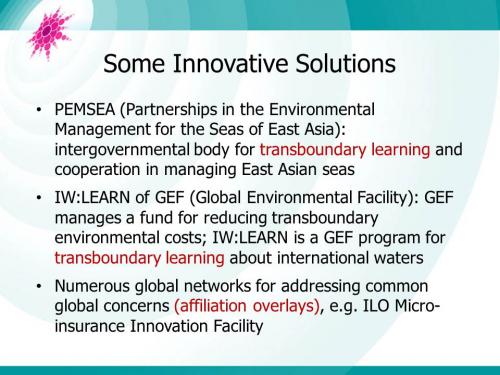 In response to such global problems, transboundary innovations have emerged. Several governments in East Asia established the Partnerships in the Environmental Management for the Seas of East Asia (PEMSEA) to undertake transboundary learning and cooperation in managing an international body of water that commonly borders their countries. The Global Environmental Facility (GEF) manages a fund for reducing or preventing transboundary environmental costs. In its international waters focal area, it has established IW:LEARN, a program for transboundary learning in international waters. Thanks to the Internet, there are numerous global networks for addressing common global concerns. For example, the ILO Microinsurance Innovation Facility set up and facilitates a peer learning community of microisurance practitioners. 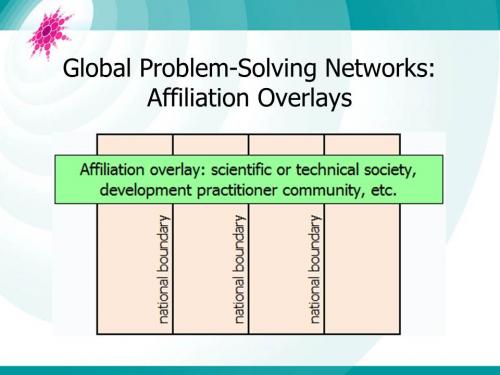 These numerous global networks serve as affiliation overlays to serve various types of problem-solving roles. I call them "affiliation overlays" because they are affiliations that cut across national boundaries and are held together by common thematic or sector concerns to solve the same or common global problems. 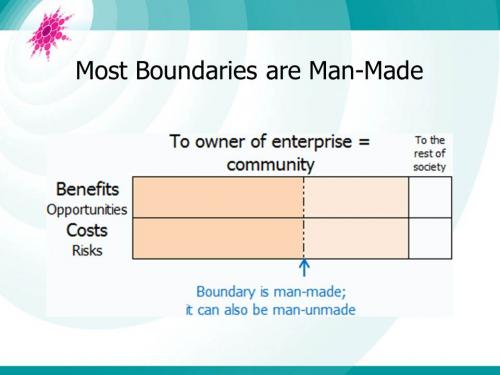 Boundaries often exist only inside our heads; they are only mental fences but these are often maintained by powerful vested interests with non-inclusive membership. However, many serious real-world problems cut across these boundaries. We need to more effectively address problems in peace and development by examining and redefining those boundaries towards greater fairness and inclusivity. Finally, one observation: boundaries are man-made and they can also be man-unmade.

Let us have productive and focused conversation at the KM4Dev community. I am sure there are many of us with observations and experiences similar to the examples given above. Please describe them. Let us listen and learn from one another so that we can build more examples and enrich our knowledge of what works in transboundary innovation for greater peace and development.

Thank you for your attention.

MORE ON THE SBCA DIAGRAM

(This is the script of the second video for the KM4Dev Focused Conversation on November 4-8, 2013 on the topic of transboundary innovation) 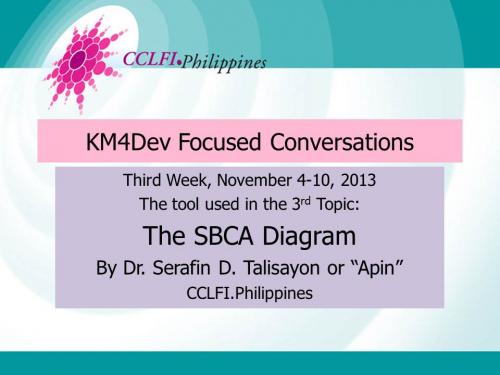 In the previous video we introduced a simple tool, the SBCA Diagram. Let us talk more about it. 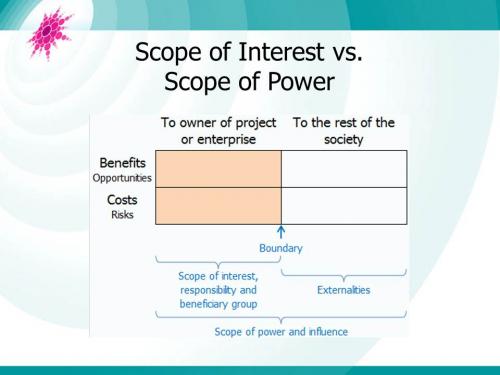 The boundary in the SBCA Diagram has more meanings. It also shows the scope of interest, responsibility and beneficiary group from the perspective of the owner of a project or enterprise. Because of enterprises are embedded within ecological and social milieus, the consequences of enterprise actions are not confined within this scope. The scope of enterprise or corporate power and influence is much larger. The results are what economists call “externalities” or “diseconomies”, which may be positive or negative, or mixed. The SBCA diagram, when viewed as a variant of the Venn diagram, shows the difference between market optimization and social optimization. 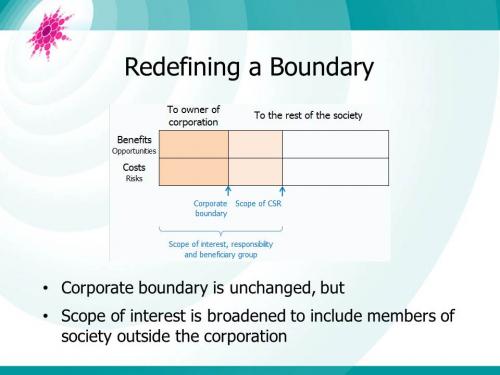 The boundary that delimits the scope of interest is man-made. It can be man-unmade. An example is corporate social responsibility (CSR) programs that some corporations had voluntarily adopted. The corporate boundary is kept intact, but the scope of interest, responsibility and beneficiary group is expanded. Private or market interest is redefined towards social interest. This is another example of transboundary innovation.

In 2009, I have written about the relationships between Scope of Interest (let us call it “I”) and Scope of Power (let us call it “P”). Because of the profit motive in the private sector, their I is often less in scope than their P. 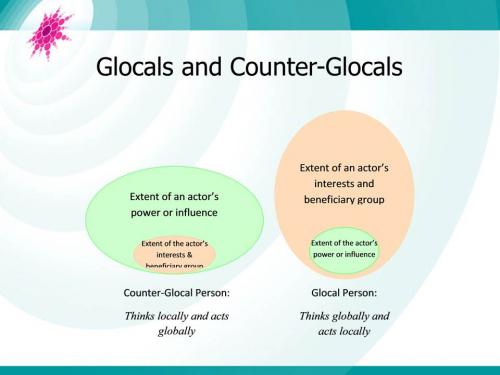 However, in the development sector one of the values of development practitioners is “think globally; act locally” – in other words, let the broader social and planetary interests inform your local actions. This has been referred to as the value of “glocality.” In other words, their I is global in scope while their P is local in scope. The Venn diagrams show these relationships between I and P.

There are corporations that had adopted CSR or some form of sustainable development scorecard or “triple bottom line” scorecard. They have redefined and expanded their corporate I towards planetary I.

These examples show that people have been defining and redefining their I and P boundaries. Transboundary innovation has been going on. Of course, the motives behind why people do these vary. As development practitioners, our advocacy here is towards greater and more sustainable peace and development for all. 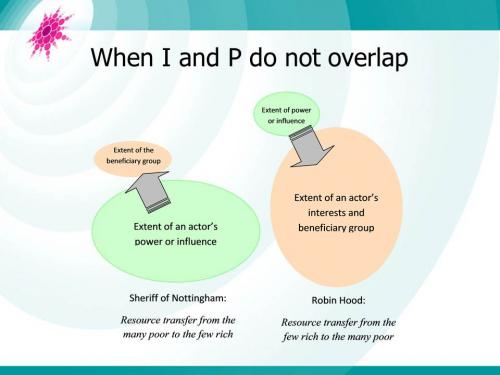 From an SBCA framework, it is easier to see that actions of counter-glocals are harmful to peace and development in the planet.

Finally, to close this short explanation of the SBCA, here are quite common examples of counter-glocals:

Thank you for your attention.